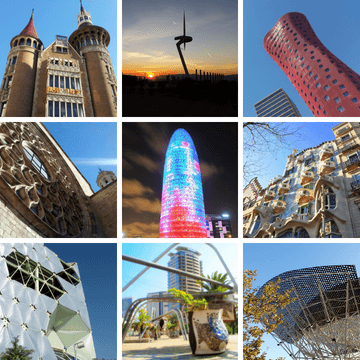 FROM THE MIDDLE AGES UP TO OUR DAYS

If Madrid is a museums city, Barcelona is an architectural city. Its buildings have planted the city skyline with iconic landmarks, already since the old ages. But behind a building there’s someone who had it in mind and put it in place. If you want a list of top buildings in Barcelona, we already have one in our blog. But who are the people behind the city architecture? That’s what we’ll discover today in this post.

Where Barcelona architects famous in the Middle Ages?

Most of the time, medieval architects didn’t get any credit. They didn’t have specific studies, but had served first as apprentices of other master builders until they reached the foreman level. But in Barcelona there’s one name: Berenguer de Montagut. He was a top master of the Catalan Gothic style, creator of the elegant church of Santa Maria del Mar, considered one of the purest examples of Catalan Gothic architecture. He also worked in the Cathedral of Manresa and the one in Palma de Mallorca, and could have also collaborated in Santa Maria del Pi in Barcelona.

If you are interested in the construction of old churches and love historical novels, the best seller The Cathedral of the Sea by Ildefonso Falcones follows the story of how Santa Maria del Mar was built, and the (fictional) character of Berenguer de Montagut has a few cameos on it.

END_OF_DOCUMENT_TOKEN_TO_BE_REPLACED

It’s here, the summer 2022 edition of new restaurants in Barcelona! Can you believe they are 76 new…

If you are considering investing in a property in Barcelona, you might wonder whether to buy a new…