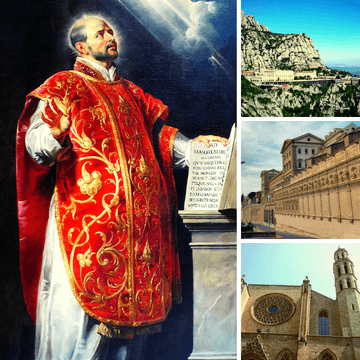 FOLLOWING THE TRAIL OF IGNATIUS OF LOYOLA

We are closing the year 2022 with a post dedicated to something that happened not far from Barcelona (Spain) 500 years ago. It was in 1522 that Saint Ignatius of Loyola visited Catalonia on his way to Holy Land, and after several mystical experiences he compiled the ideas that would form his famous Spiritual Exercises. Let’s follow together his trail and be fascinated by this magnetic character, founder of the Society of Jesus, also known as the Jesuit order.

Born in Loyola (Basque Country, Spain) in 1491, Ignacio (also known as Iñigo) was the youngest of 13 siblings. He became a knight, and he was seriously injured in one leg by a cannon ball at 30 years old, during a battle in Navarra against the French. He was sent back home to die, but he survived even if he would limp for the rest of his life. Apparently, during his recovery he couldn’t find chivalry or romance books to entertain himself, so he read catholic books instead. And they inspired him to live an exemplary pious life, now that his military career was over.

So he started a pilgrimage to Jerusalem, and on his way he stopped over the Monastery of Montserrat and the cities of Manresa and Barcelona. Those stops and what happened during them were key in his spiritual transformation and the later foundation of the Society of Jesus – the Jesuit order. His forward thinking, hands-on personality and spirituality vision made St. Ignatius of Loyola one of the most important thinkers of the Spanish Renaissance.

What did St. Ignatius do in Montserrat?

Saint Ignatius arrived to the Monastery of Montserrat attracted by the fame of its statue of the Virgin of Montserrat – it wasn’t unusual that pilgrims would stop in significant religious sites on their way. His pilgrimage had taken him first to another Catalan town, probably Igualada with an important textile tradition (but some state it was Lleida instead), where he purchased a pilgrim dress – basically a very humble monk habit made of sack fabric, and a pair of espadrilles. Once in Montserrat he found a confessor, Father Xanon, and he spent 3 days with him confessing his sins and receiving counseling.

The Benedictine monk possibly introduced him to the texts that the Montserrat novices had to study before being ordained – mainly the Compendio Breve del Ejercitatorio de la Vida Espiritual, a sort of guidebook of Christian spirituality that could have influenced Saint Ignatius Spiritual Exercises. He also probably introduced him to a new prayer practice called the Devotio Moderna. After three days, his confessor told him to get rid of the mule Ignatius used to travel and to send his servant home (he came from a wealthy family, so he had started his pilgrimage “in comfort”).

Ignatius did so, and decided to blend in with the poor crowds, he found a beggar and gifted him with his knight clothes (it is said that such beggar got in trouble when other people accused him to have stolen the clothes, and Ignatius had to claim his innocence and felt terrible to have landed him in jail…). Then Saint Ignatius went to the Basilica of Montserrat and spent the night kneeling and praying in front of the image of Our Lady. With the sunrise, he attached his sword and his dagger to the fence around the altar where pilgrims left their vows and exvotos.

END_OF_DOCUMENT_TOKEN_TO_BE_REPLACED

When you ask your Chinese friend where to go for delicious Chinese food and they say Uniko, that’s…

Read ‘Bar El Pollo, Spanish, El Raval’ on the Foodie in Barcelona website. From the outside, Bar El…