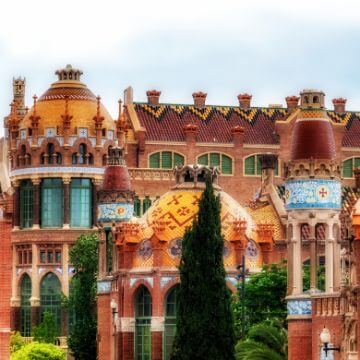 In 1401 the City Council and the Bishopric of Barcelona agreed to unify the 6 existent hospitals of the city into one single facility. It was the origin of the Hospital de la Santa Creu (hospital of the Holy Cross), the second oldest hospital institution in Europe still active nowadays. Their headquarters were located in the Raval district, in a medieval building whose cloister is now a public garden, and some of its wings are now libraries.

But in the 1800’s the population of Barcelona had grown a lot due to the industrial revolution and the immigrants coming to work in the factories. The hospital facilities were not enough to serve the city. At the end of the 1800’s the industrialist and philanthropist Pau Gil decided to make a large donation to promote the construction of a new hospital in the Eixample District that was starting to be built outside of the old town. His only condition was to add the name of his patron saint, Saint Paul, to the name of the hospital. That’s how the Hospital de la Santa Creu became the Hospital de la Santa Creu i Sant Pau, although locals prefer to use “Santa Creu” to refer to the medieval building and “Sant Pau” for the modernist enclosure and the modern hospital facilities.

The architect Domenech i Muntaner was assigned its design, and for that he travelled to visit the leading sanitary facilities in Europe, learning about the newest hygiene trends. He planned a mini-city of 48 pavilions, and teamed up with the best artists of the time to decorate them according to the Modernisme style that was in vogue at the time. The construction works started in 1902, and the first patients arrived in 1916, even if the official innauguration wouldn’t be until 1930.

The dream of building 48 pavilions was never fulfilled, and only less than half were finally completed. With the years, the pavilions were altered to add divisions and mezzanines due to the lack of space. By 1990 the need of modern facilities was evident, and the local institutions got together to plan the project. It would occupy the backside of the modernist enclosure, facing Ronda Guinardó. In the meantime, in 1997 the Hospital de Sant Pau (Recinte Modernista) together with another work by Domenech i Muntaner, the Palau de la Musica Catalana, were declared Human Heritage by UNESCO and the restoration of the pavilions started. The new Hospital de la Santa Creu i Sant Pau moved to the new headquarters in 2003.

The entrance to the Hospital de Sant Pau modernista is made from the corner of Cartagena and Sant Antoni Maria Claret, which is also where ends Avinguda Gaudi. Three elegant wrought iron gates give entrance to the encloser. The central gate is flanked by 2 groups of three columns holding the coats of arms of the City of Barcelona and the Barcelona Cathedral, founders of the Hospital de la Santa Creu. To the left of the gates stands another column with the sculpture of Saint Paul, and the the right another column supports a Cross – for the Hospital de la Santa Creu i Sant Pau.

As you cross the door, a staircase leads to the Administration Pavilion, and in the middle of the staircase there’s a fountain with the bust of Pau Gil, the donor and promotor of the construction of the modernist hospital. The pavilion is built in V shape, with an impressive central façade and two wings. The entrance to the pavilion is made through three arched doors, which are sided by 4 sculptures: the three Christian Theological Vertues (Faith, Hope and Charity), plus one more virtue added by Domenech i Muntaner: “Action”.

In the center of the façade there’s two angels holding the coat of arms of the Hospital de la Santa Creu, flanked by 6 saints (three females and three males). The building is crowned with a spire featuring a clock, inspired in the medieval belltowers. That gives the pavilion the aspect of a monastery or an old university or Catholic private school rather than a hospital. As for the two wings, their outside is more simple, just decorated with rows of windows and some mosaics about the history of the hospital located in the edges of the estructure.

END_OF_DOCUMENT_TOKEN_TO_BE_REPLACED

Looking for the best brunches in Barcelona? Here we love a good brunch! And we don’t have to…

Roots and Rolls offers something very unique in Barcelona, and does it so well. They serve Japanese/Asian fusion,…

Barcelona is lucky to have a few good Peruvian restaurants, and Panqa in Sant Antoni is undoubtedly on…